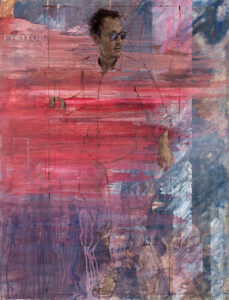 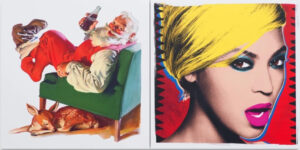 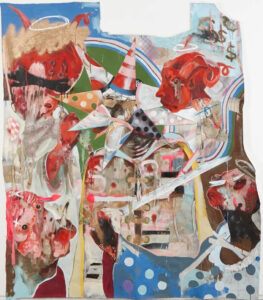 Jonathan Horowitz utilizes images that widely circulate within mainstream media to produce commentary on the most compelling political, social, and cultural issues of the present moment.

Within Pepsi Challenge (Christmas), the artist turns to “Coke,” perhaps the single most widely cited carbonated drink that serves as a signifier of American consumerism. Horowitz is particularly interested in the ongoing rivalry between Coca Cola and Pepsi Coke within this diptych—the left side of the diptych features a still from Coca Cola’s advertising that uses Santa Claus, and the right side shows a manipulated image of Beyoncé Knowles, an ambassador for Pepsi.

By juxtaposing key advertising images from both brands, the artist transforms the competition between the two companies into a humorous portrait of American culture. In so doing, he furthers the tradition of Pop art into the present moment, recalling Andy Warhol’s use of images of Coca Cola bottles as a symbol of American consumer culture in the decades prior.